Developed for the household market of smaller families, specifically to compete with the Sunday capon as a luxury poultry choice, the USDA introduced the first (still naturally reproducing) commercially successful new turkey breed, designed to create a new industry for the struggling farmers of the 1930’s. The Beltsville Small White turkey was named for its birthplace, the famous Beltsville, Maryland USDA poultry research station. Introduced to the market in 1941, they quickly became the premium 25% of the domestic market. The Beltsville Small White turkey is a miracle of traditional selective breeding, and a priceless agriculture heritage. They could fairly be called the “mother” of the modern turkey industry. This small, busty, naturally reproducing (modern turkeys can’t breed naturally) true heritage turkey with its practical snowy white plumage looks like its descendant, the modern giant industrial BBW, but there the similarity ends. Smart and personable, hardy, fertile and capable foragers, layers of delicious eggs almost year-round, they produce a delicious meaty table bird 8-16 pounds in 6-7 months. They will breed naturally and raise their young in their first adult year and can be managed for year round production without specialized reproductive technology. The BSW was declared “extinct” in the USA as a pure breed by the APA in the 1990’s, and they remain designated as “critically endangered” by Rare Breeds Canada and the American Livestock Breeds Conservancy. We are pleased to report that they are making a well deserved come-back in Canada from the priceless Canadian and American pedigreed foundation flocks maintained at Cirrus Hill Farm. The BSW is the ideal choice for the family poultry flock, hobby farms and CSAs able to market a true gourmet product, and are an APA standard breed for exhibition. Smaller, and so gentle and friendly, much more sociable and endearing than chickens, they make enjoyable pets, and a great 4H project for the youngsters. Kids are certain to wow the judges and come home with ribbons from the county fairs with their charming, easily trained Beltsvilles, and your family will be “hooked” on these old-time turkeys!

Welsh Harlequin Ducks – Layers of Duck Eggs – Who Knew? And Gorgeous to Boot! 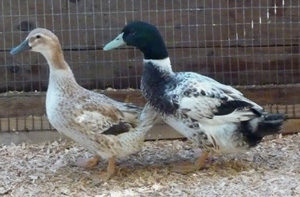 A silver colour sport which arose in a flock of (khaki) Campbell ducks, the beautiful Welsh Harlequin is essentially the 19th century British Campbell duck breed after a colour make-over in the early 20th century. Considered endangered, they are rarely seen on Canadian farms. These Campbell-types are lighter weight, active foragers and will outlay any heritage chicken breed while finding more of their own food. The colourful Welsh Harlequin is a little heavier, and definitely more laid back than the excitable Khaki Campbell, and this strain lays better, possibly because they don’t stress themselves out with so much silly-duckie-ness. Colouring is like a brilliant frosted mallard on the drake, and subtle elegance on the hen ducks. We keep both the silver APA standard pattern and the rarer gold phase preferred for exhibition in the UK. These entertaining layer-dual purpose ducks are a bit too small to be profitable for the retail table market, but extras are very tasty additions to the family bill of fare, and their lighter weight makes them light on their feet, perfect for organic pest management programs. A goo choice for dedicated layer flocks, they also make beautiful, easily gentled and trained pets, with just a touch of amusing silliness.

The Buff Orpington DUCK (no, not the chicken, we know the difference)

The honey-cinnamon coloured Buff Orpington Duck was developed in the 19th century by celebrated poultry breeder William Cook, on the same farm as the more famous Buff Orpington chicken. His exceptional poultry breeding skills and many books popularizing poultry keeping made Mr Cook a wealthy Victorian gentleman. The Orpington duck was very popular in several colours in it’s day as a profitable heavy-laying dual-purpose market duck. Only the practical buff colour pattern has survived, but its splendid utility properties have been well preserved. Their have a calm temperament, reliably heavy production of large, high quality eggs, and yield a leaner-than-Pekin 4-5lb table duckling free of pin feathers. Modern chefs love them too. These are the rarest of the standard bred heritage ducks we offer, and are highly recommended for a multi-purpose farm flock, combining all of the best features for small farm use in a sweet, self-confident free-range utility duck, tolerant of both heat and cold, and in desperate need of more preservation breeders. They are also an APA standard breed for exhibition, where these aristocrats of the fabled Victorian Age of Poultry are often just called “Buff” ducks. How dull.

White Chantecler Chickens, originally bred at the Abbey Notre Dame du Lac at Oka, PQ in the 1900’s, the white Chantecler is Canada’s native heritage chicken breed. Brother Wilfred Chatelain developed a “Canadian” chicken, a dual purpose meat and laying bird, tolerant of bitter Canadian weather, and reputed to continue laying their large, creamy brown eggs through the long winters, when American and European breeds give up. Active, athletic foragers, they are quick and wary enough to reduce predation losses on range, and to look after themselves around the farm. Our Chantecler roosters are consistently polite and gentle with humans making them an excellent choice for the family with younger poultry keepers. On the Rare Breeds Canada and ALBC “critical” lists, and recognized by the APA in 1921, the Chantecler also sailed on the Canadian “Arc of Taste”. Our standard-bred Quebec blood-line is additionally selected for large size, meaty conformation and kindly family safe roosters, and produces successful show stock as well as excellent utility birds for homestead use or CSA grow-out. Our bloodline is represented in flocks in every province and the Yukon. 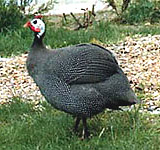 We don’t breed these birds, but bring them in to raise with our Beltsville turkeys who are so kind to the little guinea keets and seem to enjoy hanging out with them. We make them available to our customers to try, mostly because we enjoy them so much. They are the heavy weight meat type raised for market in Quebec and France, where they are nearly as popular as chicken. The African guinea fowl is a flocky bird of the drier scrub and grass land which was known to be kept in Southern Europe at least since the time of Alexandra the Great, and is an active and effective forager. No insect, tick or little critter is safe from a flock of guineas roaming your property and patrolling your garden (they don’t scratch up your plants like chickens would). Beautiful and exotic, the heavy type raised through the summer are chatty with their odd calls, but are much more pleasant to live with than the conventional guineas. Their steel grey lavender feathers are covered with small whites spots, and just beg for craft projects. These birds are ready for processing after 12-14 weeks grow out at 3-4 lbs, and have a higher meat to bone ratio and richer flavour than chicken.